Theresienstadt 1944: This is where Pavel Haas composes the Four Songs on Chinese Poetry, which is a surreal song cycle on the unfulfilled longing for a return home – and directly refers to the Suita op. 17. It remains the composer’s last surviving piece. Here, under even more menacing circumstances, does he follow these ideas that have remained incomplete five years ago through?

Sleep, you don’t grant me this dream:
my longing keeps me awake.

On 2nd November 1941, about two years after completion of the Suita, Pavel Haas was deported to the Theresienstadt ghetto. For him, a normal life was as impossible before as after deportation. In April 1940, he and his wife had decided to split up, so that she, as a non-Jew, could pursue her profession as a doctor again. This ensured her livelihood, as well as that of their daughter. Pavel had already lost his job for quite some time, since he used to teach at a Jewish Grammar School which had been closed down. Together with his father, he had been forced to move into a collection flat for Jewish households. Contacts to the rest of the population were impeded more and more and he could only meet with Soňa clandestinely as well.

In November 1941, the German occupiers of Czechoslovakia had established a transit camp in the garrison town of Terezín (Theresienstadt in German), which was mostly intended for the country’s Jewish population en route to the large extermination camps. Haas was among the first inhabitants of the camp and, at first, detained alongside about seventy other prisoners in a barracks room. Those among them that were able to work had to perform hard and rough work in order to prepare the camp for the imminent masses of inhabitants. This initial period proved to be catastrophic for Haas, since he, as well as many others, suffered from the exhausting labour and bad nutrition.

Until 1942, the civilian population of Terezín was resettled completely, transforming a city of 3,500 into a camp with well over 40,000 prisoners. In spring of this year, Pavel Haas’ 71-year-old father also came to Theresienstadt. In the meantime, Pavel had succeeded in obtaining an administrative post in a policlinic. This enabled him to dedicate himself to composition again. In order to maintain peace and order in the camp, the SS headquarters installed a Jewish council of elders, which had to take on administrative tasks and which was supposed to create the illusion of free life in Theresienstadt. Despite this, it was also responsible for selecting prisoners for deportation to the large extermination camps. By and by, since hundreds of outstanding scientists and artists were detained in the camp, a brisk cultural life developed, which was even supported by the camp authorities. Among this group of detainees were several prominent musicians: Apart from Haas, there were Viktor Ullmann, Gideon Klein, Karel Ančerl, Bernhard Kaff, Hans Krása and others. The cultural scene exceeded that of a city of comparable size by far.

After the Danish government demanded elucidation of the destiny of the Danish Jews who had been deported to Theresienstadt, Adolf Eichmann, the head of the Eichmannreferat, which was in charge of the expulsion and deportation of the Jewish population, allowed for the camp to be inspected by representatives of the International Committee of the Red Cross in June 1944. This inspection was preceded by months of “beautification measures”. They were intended to transform Theresienstadt into a showpiece camp. The commission inspected the newly built cafés, the “children’s pavillon”, which had just been constructed beforehand as well, the hospital for incurables and the public baths and attended a performance by the children’s opera Brundibár by Hans Krása. Conversations with prisoners in private were not conducted. The suffering of the inhabitants was concealed this successfully, that the Red Cross apparently did not deem inspections of other camps in the East necessary.

Subsequent to this visit, the Nazi propaganda produced a film on Theresienstadt (Theresienstadt. Ein Dokumentarfilm aus dem jüdischen Siedlungsgebiet, Theresienstadt: A Documentary Film from the Jewish Settlement Area in English), which also came to be known under the title Der Führer schenkt den Juden eine Stadt (The Führer gives a city to the Jews in English). The film, which was intended for a German and international audience, tried to depict the supposedly good living conditions of the prisoners in multiple ways and thereby counteract the spreading rumours of a scheduled extermination of the Jewish population of Europe. What is shown is the schematised daily routine of a seemingly “normal” life of the prisoners in the ghetto. Here, too, the SS headquarters deliberately made use of the cultural life for its propaganda purposes – a concert by Karel Ančerl’s string orchestra after a performance of an piece by Haas is shown as well. One can see Haas himself in the film, being on stage and thanking the audience. The director and scriptwriter Kurt Gerron, the majority of the involuntary prominent performers as well as the child actors were deported to Auschwitz after the shooting and murdered. (parts of the movie can be watched at youtube, Haas can be seen on the link below at 12:21 and 12:30.)

During this period, the year 1944, the last conveyed piece by Haas was composed: Four Songs on Chinese Poetry. This cycle was a gift for the bassist Karel Berman, who had come to Theresienstadt in ’43 and sang the premiere on 22/7/1944. The resonance was this great that there have at least been 15 repetitions of the concert. This cycle is based on Bohumil Mathesius’ reworks of Chinese verses. Haas did definitely not set it to music out of a fascination with an exotic atmosphere but because he found poems in it which corresponded to his sentiments and longings. The selected texts explore the yearning for the distant home, the return home and the reunion with relatives. Therefore, it is understandable that the songs resonated especially with the listening prisoners.

But what can these songs mean for the interpretation of the Suita? First of all, the entire cycle is steeped in the Saint Wenceslas Chorale again. The first song Zaslech Jsem Divoké Husy (I’ve Heard the Wild Geese) could be a direct sequel to the last movement of the Suita. Here again Haas creates a developing ostinato out of the chorale. However, unlinke five years before, it does not lead to an apotheistic finale but weakly falls apart at the end of the song. What is remarkable here, is, too, that the intervals of the first bar of the voice part are identical to the oboe’s in the Suita. 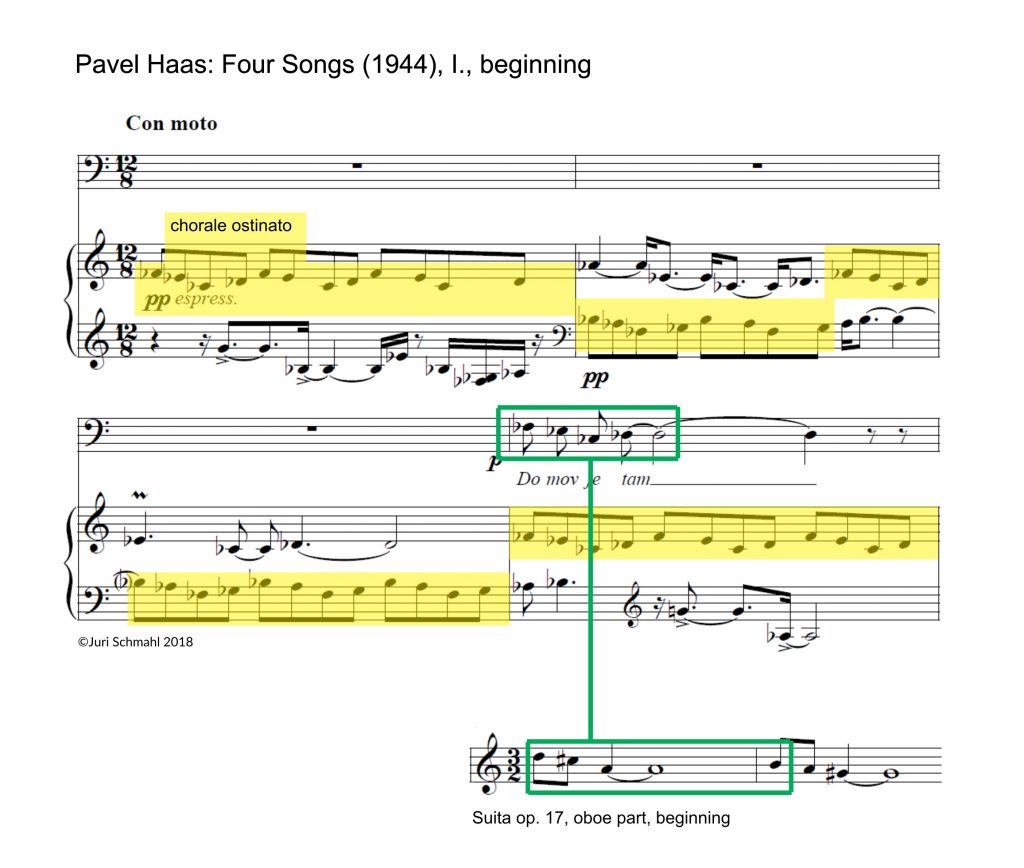 Finally, the third song Daleko měsíc je domova (Far Is the Moon of Home) constitutes a direct reference to the Suita. It begins with a slow, shadowy chorale ostinato. After all, Haas quotes the Suita directly at a very prominent point of the song: My hands, my hands, they are too void to express all this . 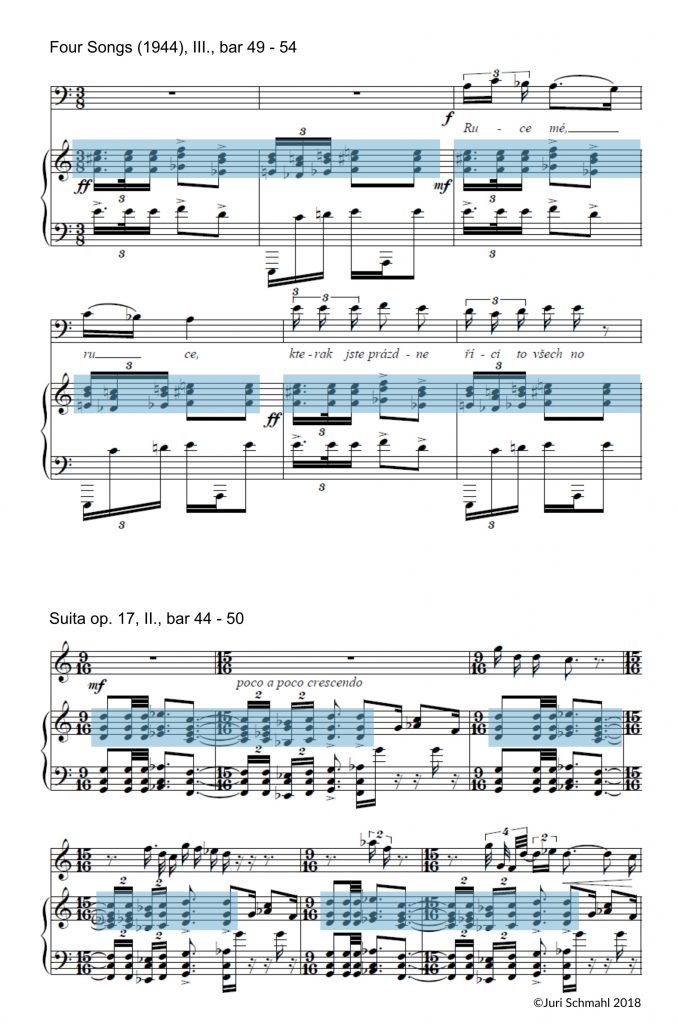 Was Pavel Haas able to finally conclude thoughts that have remained incomplete in Brno? It certainly is not a coincidence that he thinks back especially when contemplating this oeuvre. Moreover, it is a testament to the significance of the Suita’s content, which has accompanied him all these years. By referring back, these surreal songs are key to understanding this complex oeuvre, since they, finally, possibly even more silently and thereby more radically, express what he must have felt at heart.

During the last turmoil of the Second World War and due to the emerging defeat of the Third Reich, the deportation of as many prisoners as possible to the large extermination camps was commanded: Solely in the period from 28th September to 28th October, the Nazi regime thereby murdered roughly 18,500 people, among them the majority of the artists within Theresienstadt. Haas was chosen for transport on 15th October, left the ghetto the next day and was presumably murdered alongside his friend, the pianist Bernhard Kaff, and the conductor Karel Ančerl in Auschwitz-Birkenau on 18th October. Hoping to thereby conserve them, he took the majority of the oeuvres that he created in Theresienstadt with him to the extermination camp. This is the reason why we are left with but a torso of his creative work. The four songs constitute his last artistic legacy.