Pez’s Sÿmphonia has ties to the past like no other large-scale solo for oboe with continuo. Why is it worth rediscovering today? An expedition making us reminisce about a passed future.

Why does an unimposing manuscript from the Rostock University Library, namely the Sÿmphonia for oboe and basso continuo by the Württembergian Hofkapellmeister (i.e. court music director) Johann Christoph Pez (*1664 in Munich, †1716 in Stuttgart, short biography at the end of the article), merit paying such special attention to it? Stylistically, this piece is positioned exactly at a time of change – on the one hand, melodics and phrasings often draw on phrases of the late 17th century, while, on the other hand, many formal elements point at the beginning 18th century. Thereby, they resemble Händel’s early sonatas. Even though the piece is not accurately datable, presumably, no other solo with continuo on such a large scale, which indicates oboe as a solo instrument and, stylistically, relates to a period so far back in time, is delivered to posterity. To me, this piece became a rewarding expedition which could broaden my view of the past as well as of present-day music-making.

Originally, the Sÿmphonia surely was composed for violin and later adapted for oboe, which is definitely proven to us by the sources. However, this in no way lessens my interest in this version since, for this period, this is not at all astonishing: the oboe had just been established at European courts (→ see JC Pez: A new instrument demands new music (1/2)) The Rostock version is therefore especially interesting because, here, we can reconstruct how a copyist (probably an oboist) reimagined the violin version for oboe.

Apart from the Rostock University Library’s manuscript (Mus.Saec.XVII.38/26), there also is a copy of the Sÿmphonia at Universiteitsarchief Katholieke Universiteit Leuven (Archives of the Di Martinelli Family, VII 59, pp. 64-66) in Leuven in Belgium. While the Rostock (oboe) version exhibits many corrections, mistakes and modifications, the Leuven version is a clean copy, which arguably reveals the piece’s original shape and, due to its range, obviously is intended for violin:

So, what did the copyist change to make the piece playable? First and foremost, he naturally rewrote some melodic lines to eliminate everything beyond the baroque oboe’s range, all notes beneath the c1 and above the c3, thereby often intervening in the musical substance to a strong degree. In addition, a short recitativo passage before the concluding gigue was completely deleted. In order to save the physical condition of the player, passages without solo were added in between the variations of the passacaglia. However, one often cannot discern what the final version looked like at all: 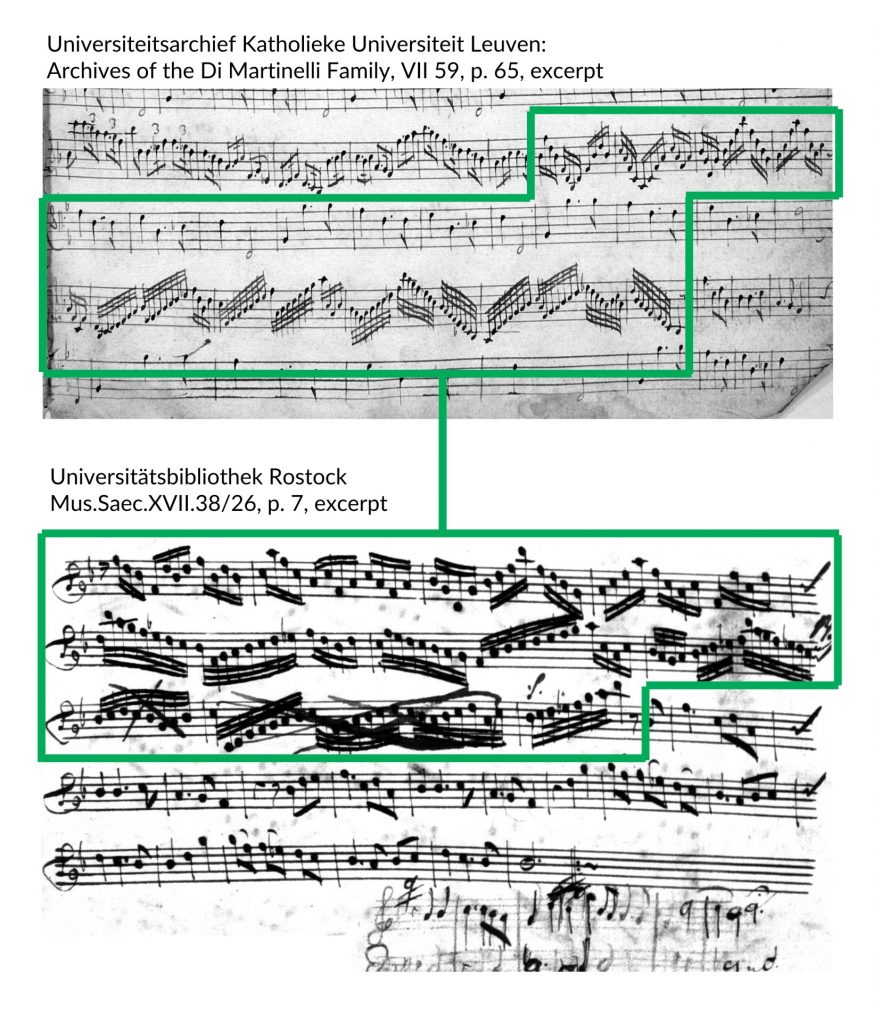 The Rostock manuscript comes from Crown Prince Friedrich Ludwig of Württemberg-Stuttgart’s music collection (http://www.ortus-musikverlag.de/de/ortus-studien/om61) and therefore presumably originated in JC Pez’s direct environment. JC Pez was the Württembergian Hofkapellmeister (i.e. court music director). Thus, it definitely is legitimate to play this piece on oboe according to this source and it even might encourage arranging further pieces of this period in the next step.

As a means of making the Sÿmphonia playable today, a lot of editing is required. Unfortunately, the edition by Christoph Schneider at Universal Edition solely relies on the Rostock source. This is the reason why a major part of the information was not taken into consideration. Eventually, for the CD, I decided to combine the sources and to not strictly adhere to the oboe version. These are decisions everyone can make for him- or herself. Therefore, here, I intend to make available a complete version for comparison as well as a practical concert version in the way I used them:

Pez is the descendant of a Munich-based musician’s family and received his musical education at the local St. Peter’s school. In 1688, he became Hof- and Kammermusiker (i.e. court- and chamber musician) of Elector Max Emanuel, who granted him a study visit to Rome from 1689 to 1692. This is where Pez also got to know, among others, A. Corelli’s music. After his return in 1694, he was appointed to reorganise the court chapels at the residences in Bonn and Liège by Johann Clemens, who was the elector and archbishop of Liège. In 1696, the designation to Hofkapellmeister (i.e. court music director) followed. After the outbreak of the War of the Spanish Succession (1701), he returned to Munich’s court chapel as a viol player, organist and composer. Afterwards, in 1706, after its dissolution, he relocated to the Württembergian court in Stuttgart, where he became the successor of J. S. Kusser as Oberkapellmeister (i.e. highest music director) and remained there until his death in 1716. During his lifetime, Pez was held in high regard and his pieces’ popularity spread as far as the Netherlands and England. Still in 1725, Telemann counted him among the best German composers and J.S. Bach, demonstrably, performed his pieces repeatedly in Leipzig and Weimar.